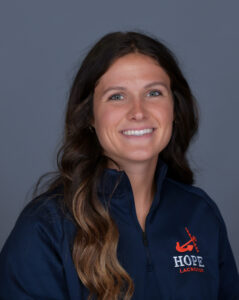 Keagan Pontious is currently the Head Coach of Hope College Women’s Lacrosse. She lead the Dutch to the MIAA Conference Championship and finished the season with a 11-3 overall record.

In 2019, Pontious finished up playing DII lacrosse at Seton Hill University in Greensburg, Pennsylvania. Her senior year, she was named a NCAA Division II Intercollegiate Women’s Lacrosse All-American and helped Seton Hill advance to the NCAA tournament for the first time. She finished her career leading the PSAC Conference in Draw Controls.

Her coaching career began in central NJ at Colts Neck High School, and she coached the high school team for United Lacrosse Club for 3 years before moving to Colorado. Coach Gero attended Georgian Court University in Lakewood, NJ. While at GCU Gero was a 4 year defensive starter for the women’s lacrosse team and 2 time first team all conference defender in the first 2 years that Georgian Court entered the CACC.

Maddie Dugan is currently the head women’s lacrosse coach at Trine University, where she’s led the Thunder since 2016. Previously, Maddie served as assistant coach at Adrian College and Wartburg College in Waverly, IA.

Maddie played four years at Adrian College as an attacker. As a player, she was undefeated in conference play in the MWLC (Midwest Women’s Lacrosse Conference) and the MIAA (Michigan Intercollegiate Athletic Association) as well as a four-time conference title winner. During her four years at Adrian, the Bulldogs made four appearances to the NCAA National Tournament and to the second round twice. Maddie was an All-Conference Second Team member her junior year and an All-Conference First Team member her senior year. She is originally from Rochester, MI and attended Pontiac Notre Dame Prep.

Carly Pieri was a four-year midfield starter at Hope College for the Flying Dutchman. Her second year at Hope she re-wrote much of the college record books taking top honors with points, goals and assists per season. Pieri also earned all conference honors both her freshman and sophomore years at Hope in addition to be named to the Academic Honor Roll in 2018 and 2019. Carly Pieri graduated from Hope in 2021 majoring in Special Education and Elementary Education.

Pieri, a graduate of Caledonia High School was a 2-year captain for the Scots, Academic All American, earned all conference honors, and still holds many high school records including most ground balls per individual game as well as per season, along with draw controls.

Pieri returns to the Pure Advantage youth coaching staff for her fifth summer.

Liv Ghent is a midfield starter at Trine University. She received MIAA All-Conference in 2021 leading her team to a fantastic season for the Thunder.

Prior to Trine University, Ghent was a two year starter at Tiffin University. Ghent is the graduate of Caledonia High School. While attending, she was awarded with All-Conference Honorable Mention and All-State First Team. Ghent also earned Academic All-Conference.

This will be Ghent’s fourth summer coaching with Pure Advantage.

Courtney Pontious played four years as a starting midfielder at Transylvania University in Lexington, Kentucky. As a sophomore, junior and senior she was First team All-Region and First team All-SAA.

Prior to Transylvania, Pontious played at Seton Hill University in 2018. As a freshman, she was a starting midfielder for all 16 games. Pontious is returning to Pure Advantage to coach for her second summer. 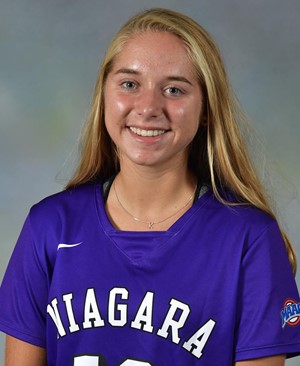 Kendall Schneider is a sophomore at Niagara University a D1 in New York. Prior to Niagara, she was a four year starter at Caledonia High School.

This will be Schneider’s third summer on the Pure Advantage coaching staff.

Amber Kaludis is our small group and skills coach! She is originally from Rockford High School where she won two state champs in 2013 and 2014. She was a captain in 2014.

Kaludis played at Davenport University for four years where she was a starting attacker. She won a NAIA national championship in 2016 and was captain in 2018. Following her collegiate career, she coached for two years at Davenport.