Maddie Dugan is currently the head women’s lacrosse coach at Trine University, where she’s led the Thunder since 2016.

Previously, Maddie served as assistant coach at Adrian College and Wartburg College in Waverly, IA. Maddie played all four years at Adrian College as an attacker. As a player, she was undefeated in conference play in the MWLC (Midwest Women’s Lacrosse Conference) and the MIAA (Michigan Intercollegiate Athletic Association) as well as a four-time conference title winner. During her four years at Adrian, the Bulldogs made four appearances to the NCAA National Tournament and to the second round twice. Maddie was an All-Conference Second Team member her junior year and an All-Conference First Team member her senior year. She is originally from Rochester, MI and attended Pontiac Notre Dame Prep. 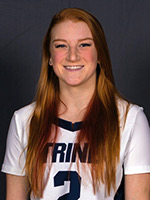 Becca Plantz graduated from Trine University in the spring of 2018. She was a four-year starter for the Trine University Women’s Lacrosse team. During her seasons played, a majority of one season lost to injury, she climbed the school records and received academic recognition all four years. Leading the team as a captain her junior year, she received MIAA Offensive Player of the Week in week three of the season. As a captain her senior year, she topped multiple single season and career records and received All Conference Second Team. She is originally from DeWitt, Michigan where she attended DeWitt High School as a four-year starting varsity player receiving all conference and academic honors. She currently resides in South Bend, Indiana as a civil engineer for the City of South Bend.

Kendal Schneider is a freshman at Niagara University. Prior to Niagara, she was a four year starter at Caledonia High School.

This will be Schneider’s second summer on the Pure Advantage coaching staff.